The hills, barely visible behind our local high school.

Nine days after the start of the most destructive fire in California history, the Bay Area is filled with smoke. When you walk out of your house, you smell it. There’s ash on your car in the morning. The parks, normally filled with kids, are eerily empty. Our air quality index has been between 160-180. Unhealthy.

In our western part of Silicon Valley, you can barely make out the hills a couple miles down the street. The scenery around us is grayed out, like an unavailable option on a computer screen.

We’re staying at home. Inside.

I’m trying to write for NaNoWriMo, so this has worked pretty well for me. When I get antsy, my go-to is usually a hike. Since I can’t do that, I write. I research. I dip into that stack of unread books spawned by my serious book buying addiction. More than usual, I’m getting stuff done.

In the evenings, we’re watching movies and playing games. My youngest is obsessed with 1980s movies, which is amusing to me, since these are the movies of my youth and young adulthood. She’s obsessed with the Back to the Future series, which has made for lots of deep discussions. The kind that you hope for and don’t easily get. What events in your life caused you to be who you are today? What if things had happened differently? And, more importantly, was Biff Tannen really modeled after Donald Trump? (Yes—confirmed by screenwriter Bob Gale in a 2015 Rolling Stone Interview).

And we’ve played board games, one of my husband’s favorite things to do. As an introvert, he socializes more easily when he’s doing something. And occasionally, I do win a game.

Our bad air quality is expected to last through Tuesday (four days from now).

Indoor life has been less frustrating than I thought, a reprieve from busy Silicon Valley life. The sad thing is to go outside, smell the air and think of the cause of all this. Two hundred miles away, people’s lives are going up in smoke. I have nothing to complain about. I have my family around me and a house to be indoors in. The people in and around the town of Paradise, California do not. And their situation is heartbreaking.

I got some sobering perspective from this post by a woman who grew up in Paradise. “Please Excuse the Smoke,” https://legitfaith.wordpress.com/2018/11/16/please-excuse-the-smoke/

Are you holed up indoors, too? For those of you outside California, what’s your perspective on what you’re seeing and hearing about the fire? 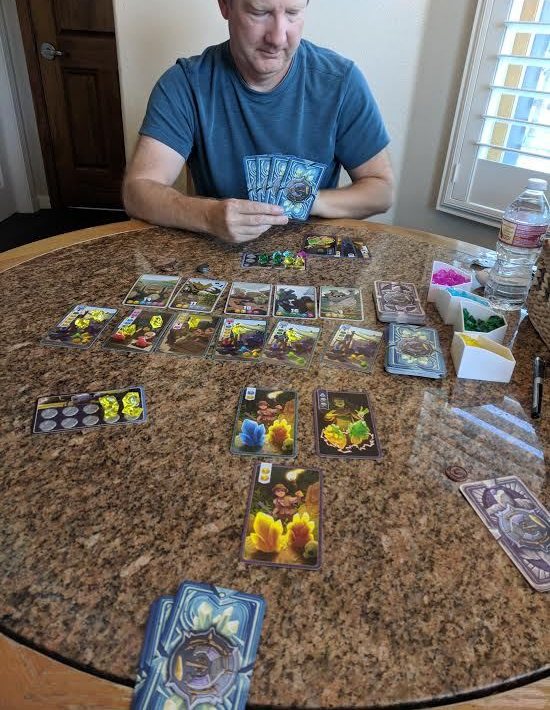 Century, Golem Edition. A family addiction for us.

I grew up in a family of poor sports.

The kind of people who stomped off to their bedrooms when they started losing a game. I remember Monopoly games so intense that objects were thrown. Issues came up that had nothing to do with the placement of little green houses on Park Place.

Soon the winner (often my mom) was gloating, losers were dredging up past grievances and I was ducking into the nearest closet to hide.

But my engineer/gamer husband grew up playing games for entertainment. His dad is a card shark, who’s played in poker tournaments in Vegas. His mom and siblings love games. My husband goes to regular board game nights. The other days of the week, he is secretly plotting the acquisition of his next game—if not actually going down to Game Kastle to get it.

Since games haven’t been a happy part of my past, it’s taken me a long time to want to share that interest. My husband constantly looks for games that might lure me to play: “Honey, this one’s about art. I bet you’ll really like it!”

But in my mind, board games = angry confrontation. Or just boredom. Learning a set of rules to follow, and patiently taking turns at following them, seemed pointless to me. That’s supposed to be fun? Seriously?

But as I observed my husband, I started to see that it’s not about the game. It’s about the interactions of the players. My intelligent, introverted husband takes games to parties because it gives him a context for being social in a sea of small talk. He can explain the rules of the game he’s introducing (something he’s great at). Then the rules of the game are the boundaries for the discussions. He doesn’t have to work at coming up with things to say.

A game-playing friend of mine says she loves the interactions that happen while you’re playing a game. “You see how people react when things get competitive. You see what they’re really like under pressure. It’s a microcosm of life.”  I saw that big time when I was growing up. But playing a game is kind of like going on a virtual adventure with people. You enter into this thing together. Afterwards, you recount your adventures, you talk about what made  you win or lose, the close calls, and what you could have done differently.

If the game is really epic?  You’ll talk about it for years.

Are there some games that you’ve enjoyed playing with your significant other or family?

Games you might want to try with your SO or family:

Century (Golem Edition)
My husband found this on the discount shelf at a game store. We were immediately addicted and ended up hooking other friends. The goal is to collect colored gems, which are used to buy golem cards of different point totals. The art in this game is beautiful and the transparent gems are incredibly alluring. It’s a very easy game to learn.

Dominion
This game has made me something I’d never thought I’d be:  competitive.  You play different cards in strategic combinations to get money and victory points. The unlimited card combinations make each game different. For some reason, the variety levels the field, and no one player, even an uber gamer, has an advantage over time. I can win this one.

Apples to Apples
A social game, great family game. Many gamers won’t consider it worthy of attention. You play an adjective—e.g., “Evil, Pretty,”—and players play a card with a celebrity or cultural reference they think fits the word. Each person takes a turn as a “judge,” to pick the one they like the best. Goal is figuring out how to play to the judge so your card will get picked.

Goa
A game based on colonizing the Indian island of Goa. The idea is to set up spice plantations and colonies, and win victory points. The game is a favorite of my game-playing women friends. It pairs well with an evening of food and wine, probably because you’re constantly thinking about acquiring cinnamon, clove, pepper and ginger.

Little guy has to go to the vet. Not happy about it. He’s trying to take off the muzzle but he’s too drugged to do it. 😢. Update - this is a routine appt. Peewee gets a little extra at the vet, so precautions have to be taken.
When I came to this retreat place yesterday, I was hit upside the head with its incredible beauty. The daily palette of colors around me is composed of grays, browns, tan and dirty white. Freeways, expressways, strip malls, monotone stucco. Then I saw these views yesterday and almost lost the ability to speak. The unrestrained colors, the smells, the graceful motion of waves and branches. I need to be around beauty. It has to be part of my diet. When I see it, my first response is to create.
Sun sinking into the sea
Retreat spot tonight. ❤️❤️❤️
Retreat spot. ❤️❤️❤️
Morning sourdough, posed with my husband’s board games.